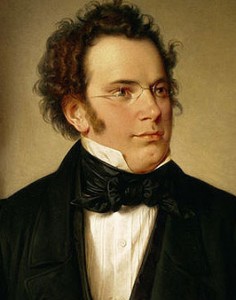 Franz Schubert (1797-1828), regarded by many as the first great Romantic composer, was born in Vienna at a time when the Austrian capital was still the world’s foremost center of great music-making. Showing signs of musical talent at a young age, Schubert received his early musical training from his father Franz Theodor on the violin and brother Ignaz on the piano. He continued his music education with the great pedagogues of the age but then pursued a career as school master, committing himself to music as a secondary occupation. Even so, he was one of the most prolific composers of his generation, composing at ease in any genre.

In 1823 Schubert was asked to provide incidental music to a play by Wilhemine von Chézy (1783-1856) entitled Rosamunde, Princess of Cyprus. With only a few weeks remaining before the premiere of the play, Schubert had to work quickly to finish writing the music. Unfortunately he ran out of time and he had to use a previously composed overture to a failed Italian opera of his (Alfonso and Estrella) as an introduction to his musical setting. The play was not successful and the music fell into obscurity until a publisher mistakenly printed the composer’s Die Zauberharfe (The Magic Harp) overture as the opening number to Rosamunde. Hence, what is known today as the overture to Rosamunde is in fact the overture to Schubert’s opera Die Zauberharfe from 1820.

The music begins with an ominous series of chords in the dark key of C minor. It is followed by a somber theme introduced by the oboes and clarinets, in the same key. Then the first theme of the main body of the work is played by the violins in the contrasting key of C major, giving way to a second lyrical second theme introduced by the clarinets and bassoons. The rest of the piece unfolds in the manner of a traditional sonata-allegro form.

Remembered in modern times for his famous Pomp & Circumstances marches and Enigma Variations, Sir Edward Elgar (1857-1934) stood as the pre-eminent English composer of his generation and arguably the greatest English composer since Henry Purcell (1659-1695). Elgar was mostly self-taught but his innate musical talent and rigorous work ethics helped him developed a style that was highly-regarded by his contemporaries. He played the bassoon, the piano, and the violin – the latter especially well. In 1889 he married Alice Roberts, a student of his. She became Elgar’s most faithful supporter and a constant source of inspiration. 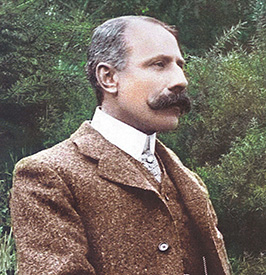 Elgar wrote his Cello Concerto in 1918-1919 following the end of World War I. The piece is sometimes to as his War Requiem in light of the music’s somber nature. Following the Great War, Elgar was in no mood to celebrate. Also, his beloved wife who had become sick would die the following year. Elgar had entered the twilight of his compositional career and this concerto would be his last large-scale work.

The 1919 premiere performance with solo cellist Felix Salmond was unsuccessful partly because conductor Albert Coates used most of the rehearsal time for the concert to rehearse another piece of music. It took the stellar 1957 performance/recording by Jacqueline du Pré for the concerto to integrate the realm of the cello repertoire. The composition stands out for its unusual four-movement setting and its use of transparent yet effective orchestration.

The first movement begins with an Adagio featuring the solo cello in a dramatic recitative-like opening. It is followed by a Moderato in 9/8, and in ternary form, at first presenting a lyrical somber melody played by the violas, and then imitated by the solo cello. The orchestra reaches its first tutti shortly thereafter. A second theme, this time more luminous, is later introduced. This movement links directly to the second.

The second movement, Lento – Allegro Moderato, also begins with a rhapsodic figure featuring the full expressive scope of the solo cello. The bulk of the movement, in the style of a scherzo, features quick sixteenth-note figurations in moto perpetuo (perpetual motion) ranging from series of repeated pitches to ascending and descending scales and arpeggios.

The third movement, Adagio, is set in the contrasting key of B-flat major and scored for strings, clarinets, bassoons, and two horns, providing a delicate accompaniment texture enabling the cello to shine as it presents the beautiful main theme of this section.

The fourth movement, Allegro, ma non troppo, also features a rhapsodic solo section in its beginning. The main theme of the movement follows, at times interrupted by introspective solo episodes borrowed from previous movements. It is in Classical rondo form. 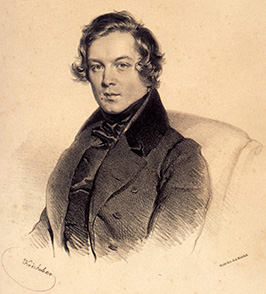 Robert Schumann (1810-1856), perhaps one of the most quintessentially Romantic composers of his time, showed interest in literary and musical arts early in life, but decided to study law as a young adult. He then changed his mind and pursued a career as a piano virtuoso. An injury to his hand prevented him from moving forward with this career path though and Schumann ultimately focused on composition, writing mostly songs for piano and voice until around 1840. He married piano virtuoso Clara Wieck (1819-1896) in 1840, against the wishes of her father. By all accounts, the pair had a happy marriage despite Schumann’s mental instability. By then, signs of mental illness where already apparent. Together they had eight children and Clara outlived Schumann by forty years. Schumann died at 46 in an asylum after a failed suicide attempt.

In 1850 the Schumann’s moved to Düsseldorf following the composer’s appointment as Music Director of that city. It was a welcomed change of setting after having lived in the somewhat conservative city of Dresden for a few years. Schumann’s tenure in Düsseldorf was a happy one in the beginning but it quickly took a turn for the worse as the Music Director’s relationship with the orchestra grew tense.

Nevertheless, early in his time in the new city, Schumann found the inspiration for what would be his last symphony – even though it is numbered as no. 3 and followed by a fourth symphony in his catalog. Schumann’s Symphony no. 4 was a re-working of an earlier symphony of his. In the fall and winter of 1850, the Schumann’s took a trip to Cologne, about 30 miles south of their new city, and they enjoyed the splendor of the countryside and of the Rhine valley. Schumann was especially moved by the sight of the Cologne Cathedral where he attended the installation of an archbishop, hence providing the inspiration for the fourth movement of his new symphony. The composition of the symphony took barely a month, and it was premiered on February 6, 1851 to great acclaim.

Schumann’s “Rhenish” Symphony stands out in the mid-romantic symphonic repertoire because of its five-movement setting (like Beethoven’s Pastorale Symphony and Berlioz’s Symphonie Fantastique from a few decades earlier), and its somewhat programmatic inspiration– even though Schumann did not want any suggestive titles assigned to individual movements and to the work in general.

The first movement, Lebhaft (lively), is a monumental piece in the structure of a sonata-allegro form. It certainly borrows from Beethoven’s Eroica symphony as it is in the same key and in the same time-signature. The opening hemiolas set a rhythmic intensity that pervade the entirety of this movement,

The second movement, Sehr mäßig (very moderate) is a bucolic scherzo originally entitled “Morning on the Rhine” by Schumann. It is in the style of a rustic Ländler, a German folk dance

The third movement, Nicht schnell (not fast), is intimate and lyrical – a testament to Schumann’s affinity for such textures.

The forth movement, Feierlich (solemn) was originally entitled “In the character of an accompaniment to a Solemn Ceremony”, and was directly inspired by Schumann’s visit to the cathedral in Cologne. The trombones make their first appearance in the work and set the solemn atmosphere of the movement.

In the last movement, Lebhaft, the jovial mood of the first movement returns. The symphony concludes triumphantly in the manner it began.